There is a tendency to believe that every increase in power means “an increase of ‘progress’ itself’, an advance in “security, usefulness, welfare and vigor; … an assimilation of new values into the stream of culture,” as if reality, goodness and truth automatically flow from technological and economic power as such. The fact is that “contemporary man has not been trained to use power well,” because our immense technological development has not been accompanied by development in human responsibility, values and conscience.

We have certain superficial mechanisms, but we cannot claim to have sound ethics, a culture and spirituality genuinely capable of setting limits and teaching clear-minded self-restraint.

The basic problem goes even deeper: it is the way that humanity has taken up technology and its development according to an undifferentiated and one-dimensional paradigm… Men and women have constantly intervened in nature, but for a long time this meant being in tune with and respecting the possibilities offered by the things themselves. It was a matter of receiving what nature itself allowed, as if from its own hand. It is a false notion that “an infinite quantity of energy and resources are available, that it is possible to renew them quickly, and that the negative effects of the exploitation of the natural can be easily absorbed.”

We have to accept that technological products are not neutral, for they create a framework which ends up conditioning lifestyles and shaping social possibilities along the lines dictated by the interests of certain powerful groups. The economy accepts every advance in technology with a view to profit, without concern for its potentially negative impact on human beings.

We have “a sort of ‘superdevelopment’ of a wasteful and consumerist kind which forms an unacceptable contrast with the ongoing situations of dehumanizing deprivation,” while we are all too slow in developing economic institutions and social initiatives which can give the poor regular access to basic resources. 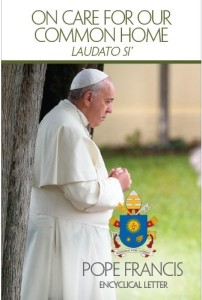 “Not only has God given the earth to man, who must use it with respect for the original good purpose for which it was given, but man too is God’s gift to man. He must therefore respect the natural and moral structure with which he has been endowed.”

Our “dominion” over the universe should be understood more properly in the sense of responsible stewardship.

When we fail to acknowledge as part of reality the worth of a poor person, a human embryo, a person with disabilities– to offer just a few examples –  it becomes difficult to hear the cry of nature itself; everything is connected…There can be no renewal of our relationship with nature without a renewal of humanity itself.  Human beings cannot be expected to feel responsibility for the world unless, at the same time, their unique capacities of knowledge, will, freedom and responsibility are recognized and valued.

Our relationship with the environment can never be isolated from our relationship with others and with God. Since everything is interrelated, concern for the protection of nature is also incompatible with the justification of abortion. “If personal and social sensitivity toward the acceptance of the new life is lost, then other forms of acceptance that are valuable for society also wither away.”