The mission of the Office of Human Life, Family and
Bioethics is to enunciate and promote the principle that
human life, at all stages from conception to natural death,
is a gift from God, worthy of respect and protection.

Praying for Conscience and Courage

I read a prayer recently, titled “Prayer for Conscience and Courage” by enedictine Sr. Joan Chittister. I was struck by the title and even more by the prayer. What
does it mean to pray for “conscience”? Isn’t a conscience simply what all of us have, that is, a working conscience that somehow lets us know what is right
and what is wrong?

The Catechism of the Catholic Church states that “the education of the conscience is a lifelong task” (no.1784), so we know it is important to learn and form our conscience with Scripture and Catholic teaching. But prayer for conscience—how does that fit?

Again, in the Catechism we read, “In the formation of conscience the Word of God is the light for our path; we must assimilate it in faith and prayer and put 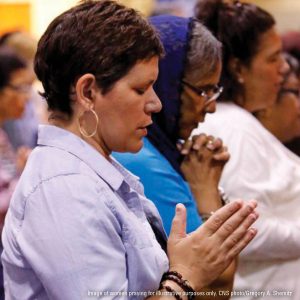 it into practice” (no. 1785). So, in order to educate our consciences, we need to pray with Scripture. We pray that we can become what it is God is dreaming for us. Right?
The prayer begins with the words, “Loving God, lead us beyond ourselves to care . . .” Then, I had a light-bulb moment when I read more of the prayer: “Give us the conscience it takes to comprehend what we’re facing, to see what we’re looking at and to say what we see so that others, hearing us, may also brave the pressure that comes with being out of
public step.” So, this prayer is written to help us in this difficult time—a time of great uncertainty and change. Sr. Joan is suggesting that we pray, asking God to give us wisdom— God’s wisdom—to help us see what is happening around us and in our world as God sees it and act accordingly.

Doing this kind of prayer is not something we automatically do. We pray for someone who is sick, for personal things we need or are worried about, but we do not often pray for a conscience that is awake, open to seeing as God sees, and open to acting on that seeing. More often, we see the world through a lens that thinks more of personal needs than of the needs of all, or the common good, as Jesus and our Church teaches us. I think about poverty. Do we have a conscience that helps us see poverty as God does? Here are a couple of people I believe have a conscience that helps them see as God sees. Pope Francis says this: “The times talk to us of so much poverty in the world and this is a scandal. Poverty in the world is a scandal. In a world where there is so much wealth, so many resources to feed everyone, it is unfathomable that there are so many hungry children . . . without an education, so many poor persons.”

Dorothy Day said: “We must talk about poverty, because people insulated by their own comfort lose sight of it,” and “Those who cannot see Christ in the poor are atheists indeed.” Mother Teresa said: “We think sometimes that  poverty is only being hungry, naked and homeless. The poverty of being unwanted, unloved and uncared for is the greatest poverty.” Is this the way you see poverty? Maybe each of us has a way to go to think of poverty the way these “saints” do, but it’s important that our conscience is moving us in that direction, one step at a time. Years ago, I had the honor of meeting a priest who had a parish in the middle of a poverty-stricken, gang-infested part of Los Angeles called Dolores Mission. At the beginning of his work there, a group
of mothers came to him, to inform his “conscience” and call him to action as they spoke to him of their fear for their sons’ lives. Gangs had taken over the neighborhood and there was a lot of violence between rival gangs.

Fr. Greg heard the mothers and let their love inform his conscience, and he has worked in his ministry to gang members for over thirty years. When I think of someone who has a well-formed conscience and someone who sees poverty and gang members as God sees them, I know it is Fr. Greg Boyle. When speaking of the attitude we should have about poverty, he says that we should “seek a compassion that can stand in awe at what the poor have to carry, rather than stand in judgment at how they carry it.” Along with a well-formed conscience, Sr. Joan added a prayer for courage. It makes sense considering that we are to follow Jesus and the radical love he showed to all of God’s people, especially those people who others shunned. We can’t do that on our own. We need God’s help.

Join me in a prayer for conscience and courage as we remember who Jesus was and what he sacrificed for all of creation.

Kathy Langer is director of social concerns for Catholic Charities of the Diocese of St. Cloud.