“Praise be to you, my Lord, through our Sister, Mother Earth, who sustains and governs us, and who produces various fruit with 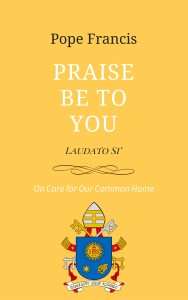 “This sister now cries out to us because of the harm we have inflicted on her by our irresponsible use and abuse of the goods with which God has endowed her.” (from the first two paragraphs of Laudato Si’)

St. John Paul II… “little effort has been made to safeguard the moral conditions for an authentic human ecology.”

Pope Benedict XVI proposed “eliminating the structural causes of the dysfunctions of the world economy and correcting models of growth which have proved incapable of ensuring respect for the environment.”

Pope Francis writes that St. Francis “shows us just how inseparable the bond is between concern for nature, justice for the poor, commitment to society, and interior peace.”

“If we approach nature and the environment without this openness to awe and wonder, if we no longer speak the language of fraternity and beauty in our relationship with the  world, our attitude will be that of masters, consumers, ruthless exploiters, unable to set limits on their immediate needs. By contrast, if we feel intimately united with all that exists. Then sobriety and care will well up spontaneously.”

The bishops of Africa in a 1999 pastoral letter wrote “Everyone’s talents and involvement are needed to redress the damage caused by human abuse of God’s creation. All of us can cooperate as instruments of God for the care of creation, each according to his or her own culture, experience, involvements and talents.”

“Change is something desirable, yet it becomes a source of anxiety when it causes harm to the world and to the quality of life of much of humanity.”

“Some forms of pollution are part of people’s daily experience. Exposure to atmospheric pollutants produces a broad spectrum of health hazards, especially for the poor, and causes millions of premature deaths.

“These problems are closely linked to a throwaway culture which affects the excluded just as it quickly reduces things to rubbish. We have not yet managed to adopt a circular model of production (as in the natural ecosystem) capable of preserving resources for present and future generations, while limiting as much as possible the use of non-renewable resources, moderating their consumption, maximizing their efficient use, reusing and recycling them.

“The climate is a common good, belonging to all and meant for all. At the global level, it is a complex system linked to many of the essential conditions for human life. Humanity is called to recognize the need for changes of lifestyle, production and consumption, in order to combat this warming or at least the human causes which produce or aggravate it… a number of scientific studies indicate that most global warming in recent decades is due to the great concentration of greenhouse gases (carbon dioxide, methane, nitrogen oxides and others) released mainly as a result of human activity. This causes warming that affects the carbon cycle and the availability of essential resources.

Many of the poor live in areas particularly affected by phenomena related to warming, and their subsistence is dependent on natural reserves and ecosystem services such as agriculture, fishing and forestry. Our lack of response to these tragedies involving our brothers and sisters points to the loss of that sense of responsibility for our fellow men and women upon which all civil society is founded.