At Easter the stones of sin, despair, are rolled away, pope says at vigil

VATICAN CITY (CNS) — As individuals and as a church, it can be tempting to dwell on mistakes, failures and sins that block the fullness of life, but Easter is the proclamation that the Lord is victorious and his love will triumph, Pope Francis said.

“Easter is the feast of tombstones taken away, rocks rolled aside,” the pope said in his homily April 20 during the Easter Vigil.

The gaze of the risen Lord, he said, “fills us with hope for it tells us that we are loved unfailingly and that however much we make a mess of things, his love remains unchanged. This is the one, non-negotiable certitude we have in life: his love does not change.” 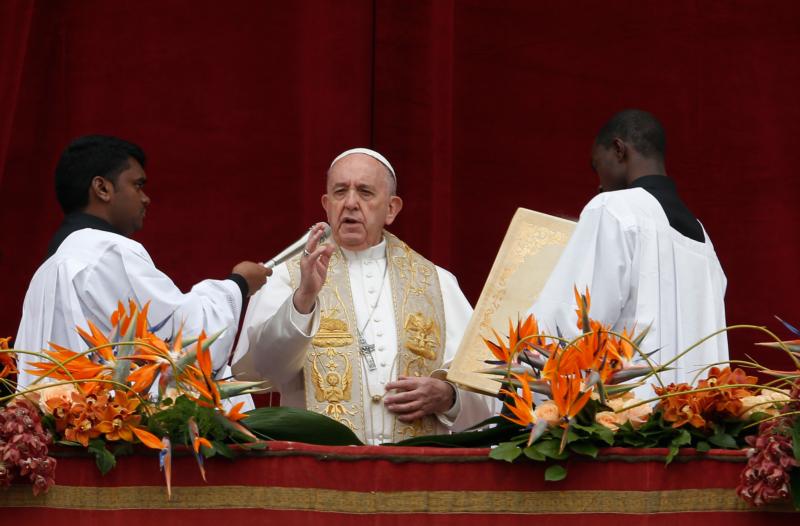 Pope Francis delivers his Easter blessing “urbi et orbi” (to the city and the world) from the central balcony of St. Peter’s Basilica at the Vatican April 21, 2019. (CNS photo/Paul Haring)

Pope Francis began the vigil in the atrium of St. Peter’s Basilica, blessing a fire and lighting the Easter candle. A deacon carried the candle into the semi-darkened basilica, lit the pope’s candle and began sharing the light with the thousands of people in the congregation. Little by little light filled the world’s largest Catholic church.

During the liturgy, Pope Francis baptized and confirmed eight adults, who were between the ages of 21 and 60. The five women and three men included four Italians and one person each from Ecuador, Peru, Albania and Indonesia.

In his homily, the pope focused on the Gospel scene of the women going to Jesus’ tomb to anoint his dead body. Pope Francis imagined that the women were worried about how they would remove the stone sealing the tomb and said that in an analogous way it is a worry the entire Christian community can experience.

“At times,” he said, “it seems that everything comes up against a stone: the beauty of creation against the tragedy of sin; liberation from slavery against infidelity to the covenant; the promises of the prophets against the listless indifference of the people.”

“In the history of the church and in our own personal history,” he said, it may seem that “the steps we take never take us to the goal. We can be tempted to think that dashed hope is the bleak law of life.”

But, he said, “God takes away even the hardest stones against which our hopes and expectations crash: death, sin, fear, worldliness.”

The church is built on the risen Jesus, the living stone, he said, “and even when we grow disheartened and tempted to judge everything in the light of our failures, he comes to make all things new, to overturn our every disappointment.”

When the women entered Jesus’ tomb, they were met by two angels who asked them, “Why do you seek the living one among the dead?”

Pope Francis said many times Christians keep focused on the dead by giving in to resignation and failure, burying hope and becoming “cynical, negative and despondent.”

The “stone of sin” also seals human hearts, he said. “Sin seduces; it promises things easy and quick, prosperity and success, but then leaves behind only solitude and death. Sin is looking for life among the dead, for the meaning of life in things that pass away.”

“Why not make up your mind to abandon that sin which, like a stone before the entrance to your heart, keeps God’s light from entering in?” the pope asked people at Mass. “Why not tell the empty things of this world that you no longer live for them, but for the Lord of life?”

Easter joy comes when people learn to view their lives as God does, “for in each of us he never ceases to see an irrepressible kernel of beauty,” Pope Francis said. “In sin, he sees sons and daughters to be restored; in death, brothers and sisters to be reborn; in desolation, hearts to be revived.”

“Jesus is a specialist at turning our deaths into life, our mourning into dancing,” he said. With Jesus, each person can experience a “Passover from self-centeredness to communion, from desolation to consolation, from fear to confidence. Let us not keep our faces bowed to the ground in fear but raise our eyes to the risen Jesus.”